Do you ever see something great on Pinterest, but can't remember if you pinned it before, so you just go ahead and pin it again to be safe? It's a common occurrence and I've heard users saying for a long time that they wish Pinterest would tell them when they attempt to pin something again. There's even a pin on the topic that made the rounds… 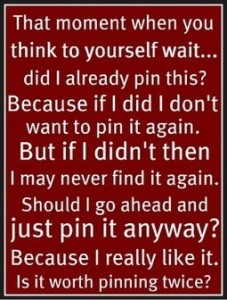 Well, users asked and Pinterest listened, because it looks like the feature now exists! Look at the message I just had pop up when I accidentally attempted to pin something for the second time! 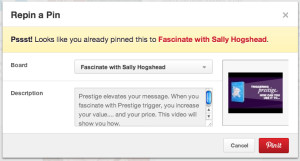 The system is smart enough to realize that it's not the first time you've pinned something, even before you choose a board to pin to. For example, when the window popped up for me, I hadn't chosen the appropriate board to pin to yet from the drop down, but Pinterest still knew that I had pinned it before – and to which board – and gave me a heads up so that I could decide if I really wanted to pin it again.

This may not seem like a big deal for some, but to those of us that pin a lot of content and can't always remember what we've already grabbed – this is pretty cool! 🙂