Some big social media news this week concerning how businesses run contests and sweepstakes on Pinterest. In the past, while Facebook had a long list of rules governing contests, Pinterest didn't seem to have any guidelines where contests were concerned. That changed this week! 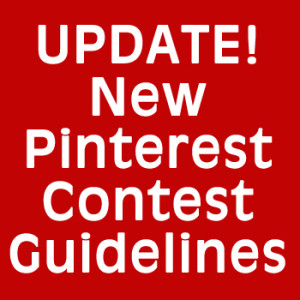 I was starting to see more and more “Pin it to Win it” type contests popping up this year. When I ran my first contest of this type back in February 2012, there really weren't that many examples out there that I could find. Perhaps it was the growing number of contests that caught Pinterest's attention and prompted them to state some guidelines for businesses! 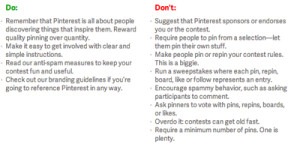 Snapshot taken from Pinterest of the new contest guidelines

To me, the biggest game changers are the following new rules, but you can see the entire list by checking out the Pinterest for Business – Marketing and Promotions guidelines.

DON'T make people pin particular things, let them pin what they want.
DON'T make people pin your contest rules. This is a “biggie” according to Pinterest and has always been pretty standard in contests I've seen in the past. It's usually the best way to spread the word about your contest after all!
DON'T use pins or repins, boards created, likes, or follows as a way to enter into a sweepstakes – or as a way to vote.
DON'T require a certain number of pins, which was also very common in Pin it to Win it type contests in the past.

At first glance this makes it seem almost impossible to run Pin to Win contests anymore, but I do think it's doable.  For the most part I think these rules are a good thing. No one wants Pinterest to be taken over by one contest after another. While it's nice to win a prize, that's not really why we're on Pinterest. We're there to create boards filled with our hopes and aspirations. We're there to shop. We're there to learn the best new DIY technique that will make our homes unique, clutter-free, and/or stylish.

So, time to put on your thinking caps folks! Contests on Pinterest aren't impossible under the new guidelines, and will hopefully inspire companies to be more creative with their giveaways in the future. I'm already working on a new idea for this summer, and I think it may be the best contest I've run yet! I can't wait to see how it turns out.

What about you, have you ever run a Pin it to Win it contest? Do you think you'll do another one under the new rules? Let me know in the comments!